Pay Trends And Prospects For 2017

The latest figures from pay analysts XpertHR reveal that pay rises effective in January 2018 were worth a median 2.5%, their highest level for almost four years.

This is still lower than the going rate for pay rises before the 2008/09 recession, and both Brexit- related uncertainty and the continuing issue of low UK productivity growth are likely to continue to restrain pay over 2018. On the other hand, however, there is high demand for skilled, qualified candidates in many professional occupations.

Looking back over 2017, the IEMA members’ survey reveals that a comfortable two-thirds (64%) of environment and sustainability professionals got a pay rise in 2017, while only 6% saw their pay decrease. Among employed professionals, 67% saw their pay increase, but among the smaller sample of self-employed members this figure shrinks dramatically to 29%.

For those reporting that their pay increased in 2017, the median increase was a healthy 3%, although the most common pay increase reported was 2%.

The new obligation for UK companies with 250 or more employees to publish their gender pay gap by 4 April 2018 (30 March for public sector employers) is focusing many corporate minds on gender pay differentials this year. Many organisations have yet to publish their data, but the reports released so far on the UK government’s gender reporting website illustrate just how difficult it is to interpret the meaning of these snapshot statistics, which are highly influenced by the proportion of women employed at both the bottom and the top of the pay scale.

There is some welcome news in the practitioners’ survey this year, which shows the gender gap for full-time employees falling to 14.1%, down from 16.7% in 2016 and 2017. As a benchmark, the full-time gender pay gap nationally for professional occupations is around 11%, although this is calculated using hourly earnings so is not directly comparable to the annual salary figures in the IEMA practitioners’ survey. Neither figure includes part-time workers, which tend to see a wider pay gap between their pay and that of full-time male employees.

One clue as to the persistence of this pay gap – albeit a smaller one than
last year – can be found in the gender composition of the workforce as seniority rises. As the chart below shows, men occupy 77% of leadership roles, whereas women make up a majority (61%) of lower-paid entry-level roles. Analysis of IEMA membership grades shows the same pattern. For example, 84% of survey respondents with IEMA Fellow status are male. If the profession is to shift its gender pay gap, then more women entering management and leadership levels is clearly crucial. 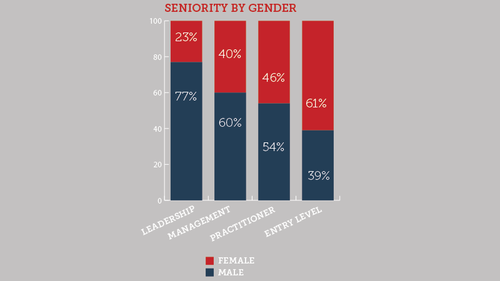 There are some intriguing findings by age and gender too, although these tend to be affected by the composition of the survey sample from year to year. There is a pay gap in favour of men that widens to £5,000 a year by the ages of 35 to 39. However, in two age groups – 40 to 45 and 50 to 54 – women appear to be earning slightly more than men. It is unusual to find pay gaps in favour of women in these age groups, and we may see them reversed in next year’s survey. 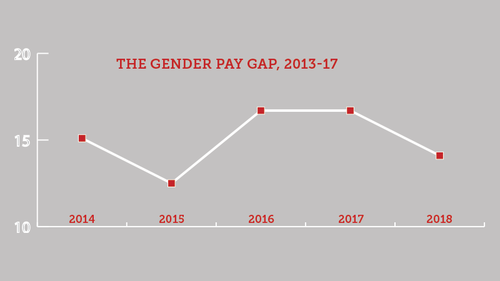 However, it is notable that there is a substantial group of women in the survey in their 40s and 50s earning in the region of £50,000 to £70,000 – which illustrates the potential for both genders to progress and enhance their earnings power as sustainability and environment professionals. 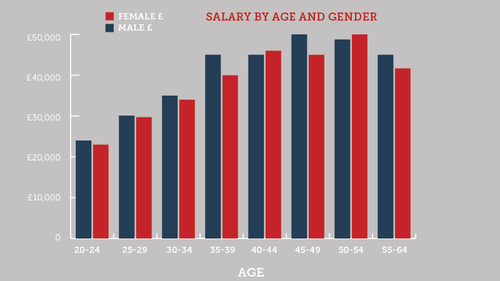