“It’s too important to work in anything else!” was the answer one respondent gave when asked why they chose to work in the environment and sustainability profession. People enter the profession for a wide variety of reasons, but having a long-standing interest in the environment or sustainability (35%) and wanting to make a difference (22%) came top of the list when respondents gave their original motivation for doing so.

A solid foundation of academic qualifications is a hallmark of the profession. Six in 10 have a postgraduate qualification of some kind, including 44% with a masters degree and 5% with a doctorate.

For some career changers, the rationale was that the sustainability field became essential to an existing role, but for more it was a personal interest in environment and sustainability issues that led them to change paths. Fewer than 3% express dissatisfaction with the move – a tiny proportion compared with the 78% who say that they are satisfied or very satisfied.

Overall, the environment and sustainability profession is one where job flexibility and mobility are important to career success. Levels of job mobility during 2017 were very slightly up on 2016, but showed a similar pattern, with most (63%) staying in both the same role and same organisation over the year. However, a significant 17% moved to a more senior role either through promotion or moving organisation, showing a healthy level of progression, while 14% made a horizontal move. 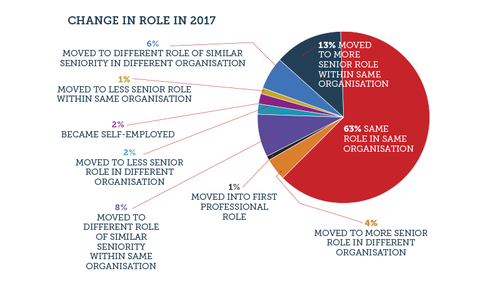 This year’s survey takes a closer look at how environment and sustainability professionals feel about both their individual role and their profession as a whole. Levels of job satisfaction remain high, with 68% satisfied or very satisfied with their current role, just 6% dissatisfied and 26% neutral. This compares well with national measures such as the CIPD’s Employee Outlook report, which in spring 2017 reported 64% of employees as satisfied and 16% dissatisfied.

It’s often hard, but I am motivated to make a difference and my role lets me do that

We asked members to select phrases to describe how they felt about being an environmental and sustainability professional and have illustrated their responses in the word cloud on the next page. The responses illustrate some of the reasons for the job satisfaction reported above: more than half (54%) say that it is rewarding while 38% describe it as “full of opportunity”. An even bigger proportion (74%) say that it is “challenging” and more than one in three (34%) describe what they do as “complex”. Strikingly, only 8% believe that their profession is “understood” by others.

For the first time, this year’s survey asked respondents to tell us about their greatest professional achievement over the past 12 months. Implementing significant systems changes or delivering a successful project at work were by far the most popular achievements, although building up a greater professional profile at work or upgrading IEMA membership were also selected by many. Making progress on their organisation’s journey to implementing various environmental standards was understandably a frequently cited achievement, but others included:

The breadth of IEMA member achievements illustrates the uniquely cross-cutting nature of the role and the importance of communication and interpersonal skills in persuading others, implementing projects and making change happen.

Of course, doing all this brings huge challenges. For the minority reporting dissatisfaction with their job role, the most common complaint is the difficulty of working in an organisation where environment and sustainability issues are not taken seriously, or even worse, there is antipathy to them.

One respondent reports: “Leadership is strong, but middle management is ineffective and does not understand environmental management.”

Another says: “Sustainability is not taken seriously – I was told by senior management that I am too passionate about the environment and that not everyone believes in climate change.”

Yet most feel that they are both making a difference and are supported by their organisations in doing so. One member describes the reasons for their satisfaction as follows: “I work for a brilliant company that are extremely supportive of any training I want to do or changes I want to make. I am constantly learning and experiencing new things.” Another writes: “I get to work with a variety of people and within a team who want to make a positive impact on the construction industry and improve sustainability.”

So as 2018 begins, are environment and sustainability professionals fundamentally optimistic or pessimistic about what the future holds? Despite political uncertainty in the UK and globally, 56% of IEMA members say they are optimistic about tackling future challenges – significantly higher than the 43% who felt optimistic in last year’s survey. Around 31% are indifferent, while 10% feel demoralised about the challenges facing the profession. Asked what the profession needs in 2018, respondents put the following factors in their top three requirements:

"There is a good mix desk-based and hands-on work"

One thing is for certain: neither the scale of global environment and sustainability challenges, nor the complexity and variety of the practitioner’s role in seeking to tackle them, look set to reduce over the course of 2018.